Natural Language Processing is a part of artificial intelligence that is concerned with the human language – computer interaction and more importantly the method of programming computers to learn to process and analyse natural data.

Natural Language Processing involves Machine Learning where the computer is analysing new forms of natural data fed to it and learning to process it in the necessary format and to perform many tasks with the given data to obtain an end product. In most cases it’s the conversion of one format of natural language to another. But in recent advancements of this technology, the development of text-to-image and image-to-image processing is also seen. One such example of image-to-image processing is NVIDIA Canvas.

Nvidia Corporation is an American Multinational Technology Company that originated in Delaware and is based in Santa Clara, California. It is a company that designs graphics processing units for gaming and studio works.

Nvidia recently introduced an application, namely NVIDIA Canvas, that uses Artificial Intelligence to read raw data from an onboard canvas in the application and process it to render an image depicting the intent of the initial data given by the user. The intended purpose of this application is to serve as a tool for artists to create art beautifully in a short amount of time.

Currently, the application focuses solely on landscapes as it is still in the BETA phase and still in development. Canvas uses GauGAN, which is a real-time painting tool, to render its art from raw figures. GauGAN is a painting tool that was initially used in the Microsoft Paint-style platform that let its users create real models of landscapes and convert them into photorealistic images. The new GauGAN2, similar to GauGAN, is a real-time painting tool that is more advanced than its predecessor as the name suggests. GauGAN2 using only text can generate images.

Although Canvas serves as a tool for rendering photorealistic images from data alone, it does not serve the purpose of giving a finished product. It is merely a connecting tool that links data to an end product which is produced by using manual software which completes the artificially generated. Canvas users begin with simplistic sketches that resemble the standard shapes or skeleton of an image. Considering Canvas currently only implements landscape rendering, we can take a mountain or a hill for example, where the outline which would look like triangles are sketched on the onboard canvas. This outline is analysed and using its machine learning, depicts the predetermined step to generating a mountain or a hill from the given shape of the outline. The analysis and process of natural data are Natural Language Processing. 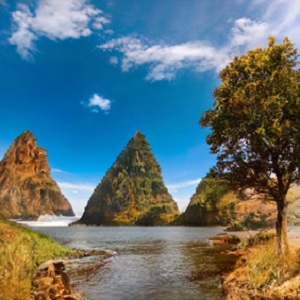 Canvas is built using a form of AI called generative adversarial networks (GANs). The AI has been trained with over 5 million images of the real-world environment. This AI consists of a generator and a discriminator. Images are formed from material maps as the generator performs its task of converting. The discriminator acts as a judge of the data shown to the application and advises the generator to create imitations of the required image convincingly.

The application also enables artwork with up to 1k pixel resolution for enhanced visual quality. Once the desired outcome has been attained, the application allows the user to export the file to any of the user’s desired creative applications for further editing and creation.

Overall, Nvidia Canvas has been a cornerstone in the innovation of image-to-image processing in AI, Natural Language Processing.