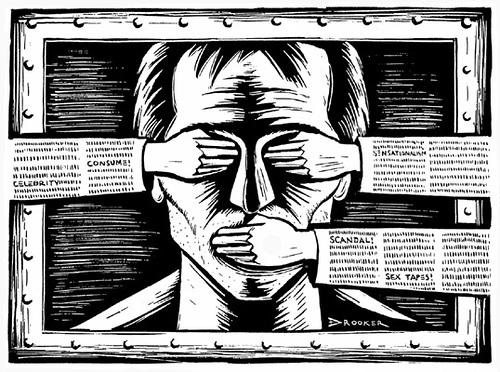 “Without censorship, things can get terribly confused in the public mind” – William Westmoreland. Mahatma Gandhi’s anecdote about three monkeys is probably familiar to all of us. The first depicts “we should not see evil”, the second depicts “we should not hear bad”, and the third depicts “we should not say bad”. The conclusion of the story is that our behavior and overall personality are heavily influenced by these three senses. The more we see or hear unpleasant things, the more likely we are to say or do horrible things. I’m here to remind you all about this story in light of the recent debate around the “Code of Conduct for OTT”.

First and foremost, we must comprehend ‘over-the-top’ web platforms, sometimes known as OTT has come to imply in recent years. BigFlix was the first OTT platform in India, launched by Reliance Entertainment in 2008. By 2015, the Indian market had attracted a slew of new OTT players. The country’s media and entertainment industry is currently served by OTT, as well as other digital media platforms. OTT broadcasts via the internet and reaches its large audience directly to their homes and smartphones. It is frequently overlooked as the country’s media and entertainment industry’s future due to its popularity, affordability, and accessibility. All video-on-demand content, audio content, messaging, and internet-based telephone services are included in OTT. However, OTT is more commonly used to refer to video streaming via the internet to the end user. Some OTT platforms require a paid subscription, while others are partially or totally free to users. Its distinct characteristics, such as uniqueness, affordability, accessibility, and compatibility, contribute to its general widespread appeal. Netflix, Zee5, Amazon Prime Video, Hotstar, and Voot are among the most popular OTT platforms in India. They all show a variety of local and foreign entertainment shows, cartoons, sports, and so on.

In terms of culture, language, faith, and belief, India is an extremely diverse country. Indians still have a large family set-ups and prefer to spend their leisure time with family and friends. As a result, the Indian media and entertainment business began with film and television as key contributors, with both of these categories being controlled and regulated by either the government or a separate censorship board. The motive is to identify and filter any offensive or inappropriate content in accordance with Indian societal needs. Abusive language, sex, voilence, or any other sort of vulgarity might be included in this insensitive and inappropriate content. The content was censored based on two assumptions: First and foremost, Indian families primarily consume entertainment with one another (preferably in joint families). Second, certain types of content or visuals are not appropriate for certain age groups, genders, or relationships, according to Indian culture. Extreme violence scenes, for example, are not suitable for females or little children. Alternatively, some intimate scenes might not be suitable to view with parents or siblings. As a result, any entertainment or media broadcast needs to be censored by responsible authority.

The Cinematograph Act of 1952 established the current structure of censorship, which oversees the regulation of Indian films. The Ministry of Information and Broadcasting oversees the Central Board of Film Certification (CBFC). Before a film is released in India, it is given different certifications such as Universal, Adults, and Parental Guidance.

Now, time has changed and continues to change on a daily basis. The influence of western culture, as well as the level of education, working class, and nuclear family structure, is fast expanding. Moreover, the COVID-19 – ongoing pandemic, pushes the reach of OTT far beyond the expectations. Further, it increases people’s self-isolation as a result of their use of the internet and related services, while on the other hand, it reduces country boundaries in terms of entertainment and media services. With fair respect to the growth of internet services, anyone with an internet-enabled portable device can access any video-audio content through OTT, coined a new term, “entertainment-on-the-go”. This pandemic elevated OTT (online streaming) to a new level of popularity among the general public. According to the estimate, In India, OTT video streaming will reach 509.7 million people by 2026[1].

Every new technological advancement increases our comfort and utility, making our lives easier. Without a doubt, these advantages are accompanied by a number of problems and risks. A small but significant part of the population raises concerns about the type of content that is shown on OTT platforms. Individuals and groups have filed several complaints about content streaming on OTT platforms. As FIRs were filed against Tandav, an Amazon Prime series, the outrage on the internet grew stronger. It is one of many examples of citizens filing a formal complaint or showing outrage in various public forums.

The Indian government is strengthening its grip on the content, language, and visuals shown on OTT platforms in response to numerous objections and concerns from individuals and other organized groups. Some in the entertainment and media industry, as well as some in the general public, hold supportive views on “freedom of speech”, advocating people to exercise their “right not to watch” rather than restricting “freedom of speech” by prohibiting offending content. The concern is, what about the vulnerable age groups, such as children and the elderly? Is the content, language, and visuals appropriate for them at this time? Have we done our homework in terms of potential side effects on this vulnerable audience? Or do we need Censorship Act for OTT platforms also? What would be the thin but clear line of “code of conduct” while addressing the masses (particularly sensitive audiences) through video-content in the midst of “neat and clean entertainment” and “freedom of speech”? Is it important for a society maintaining its originality? These are among the many concerns that leaders should handle one by one and properly, as it is aptly stated, “In our every deliberation, we must consider the impact of our decisions on the next seven generations”.