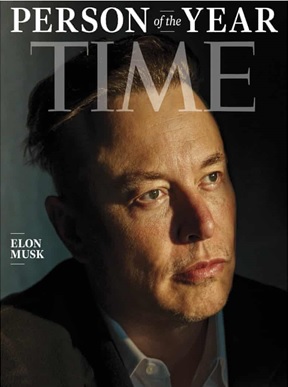 Elon Musk! Probably there is only one entrepreneur who has founded businesses from earth to space, from digital payment gateway to auto pilot vehicle. Though Elon Musk’s business ideas are technology centred, his investments are spread across different business verticals.

Elon Musk is the visionary entrepreneur who has founded companies such as Tesla, SpaceX, The Boring Company, Solar City, and so on. He is the most celebrated business icon across the globe today and getting much popular through his tweets.

Times Magazine has been following a tradition to identify and feature any individual who has made huge influence or impact on any event for either good or ill. Usually, Times Person of the Year indicates that impact of a selected person and in case of Elon Musk, he has influence on earth as well as on other planets. I wish to propose my insights on what must have made Times Magazine to feature Elon Musk – Person of the Year.

Elon Musk is a very popular figure across the globe today for his most creative and clever business ideas. His influence is not just limited to his business ideas, but also on controversial crypto currencies. The prices of crypto shot up dramatically due to tweets of Elon Musk. He even tweeted that Tesla would accept crypto as a payment mode. Immediately after sometimes, he retweeted that Tesla would not accept crypto as payment mode due to environmental concerns. This again influenced the turmoil in crypto prices. Even after altering his twitter bio as ‘#bitcoin’, the prices of bitcoin sky-rocketed. He has a worldwide influence and can be witnessed by massive followers of close to 65 million on Twitter. Few media have even reported that Elon Musk can become a greatest influencer. So, his abundant influential qualities must have made him Times Person of the Year.

Another reason to feature Elon Musk on Times Magazine could be due to his disruptive business models. Landing aircrafts and astronauts on mars, building a ship for NASA, designing auto-pilot cars, tunnel construction idea and likewise have crated huge disruptions in the business world. In view of his disruptive enterprising ability, he must have been featured.

Elon Musk is having a dream of making life as multiplanetary. He had even quoted that he is going to send million people to mars by 2050. His time and efforts to accumulate resources to help make life multiplanetary is worth appreciable and it has lead to huge impact on the people across the globe. With this great and brave vision, Times must have considered Elon Musk – Times Person of the Year.