The impact of climate change are seen in every aspect of the human life and affects all of us directly or indirectly, it is expected to affect developing countries more and India is also one of the country which will have an impact on agriculture, human health, food, water supplies and livelihoods of people etc. In the year 2015, the government worldwide came together in Paris and agreed to reduce the global warming and to diminish the impact of climate changes. The recent Glasgow Summit in the year 2021 has shown the immediate necessity to reduce the impact of climate change. Finance is one of the essential weapons to fight the global warming, as large investment funds are required to bring this change, one of the important financial instruments is “Green Bonds”.

In 2007 the first green bond was issued by European Investment Bank and later on in 2008 issued by the World Bank. Since then, many countries and government have started issuing Green bonds to finance environmental projects.

As we know a bond is a fixed income financial instrument and a green bond is very similar to other type of bonds, but the objective is to raise the funds for the environmental friendly projects that have a positive environmental impact, such as renewable energy and green buildings etc which will help to reduce the impact of climate change. The US is the largest source of green bonds; Corporations from Apple to Pepsi and Verizon have also turned to green bonds. Green bonds will have positive impact on the issuing company and create trust in the eyes of the investors and are a good promotion tool to attract the consumers and institutional investors like insurance companies and pension funds, which cares about the environment and interested to invest in low carbon sustainability projects.  It also affects the stakeholder’s interest and employee morale in the companies, which in turn leads to increased productivity and commitment among the employee’s. 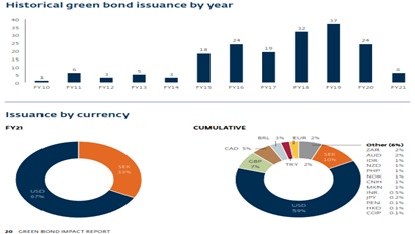 Green bonds helps to mitigate the environmental risks and like regular bonds, green bonds have attracted premium and investors are willing to pay premium for this bonds called “Greenium”. India will issue sovereign green bonds for funding green infrastructure, Finance Minister Nirmala Sitharaman said in her Budget speech. Green bonds are debt instruments that differ from conventional fixed-income securities only in that the issuer pledges to use the proceeds to finance projects that are meant to have positive environmental or climate effects”. 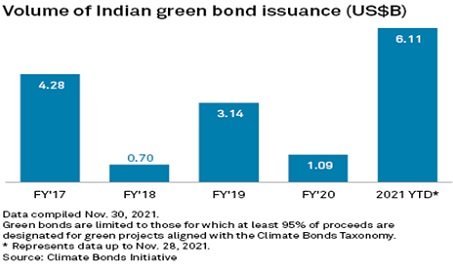 The green finance market has grown exponentially, through the issue of “green bonds large funds have generated to fund projects that have positive environmental impact or climate benefits. The majority of the green bonds issued are asset-linked bonds”. Green bonds issued by developing countries like India have a strong appeal to institutional investors, due to attractive valuation and good economic growth prospects.

Concerns remain on the use of the funds by issue of green bonds and greenwashing by companies, with the increased regulation and scrutiny would prevent companies from such issues in the future which lead the bright and cheerful green markets in the future.