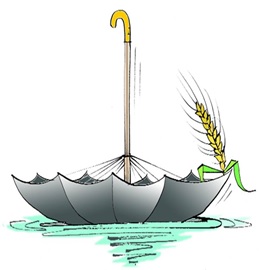 As we all know, this year (2021) the weather gods have been generous to Indian farmers. The monsoon brought record breaking rainfall, with almost all Indian States receiving excess rainfall and major reservoirs being filled at near-full capacity. Thanks to good water storage and rainfall, the primary source of income for the majority of the Indian population is agriculture which accounts for 18% of the country’s GDP. Estimates point that more than 85% of the major business related activities around the world are reliant on rainfall in one or the other way. While the Government of India is working hard for increasing farmer’s income by next year 2022, the recent survey also mentions that climate change could lead to reduction in the agricultural incomes in India on an average 18% annually. It also indicates that India incurs losses of approximately Rs. 900 crores annually due to extreme weather variations and almost 85% of the losses are not insured. Though farmers are covered under crop insurance, as it is a measure to cover against major calamities, it is hard to cover against less revenue due to climate variations. Almost all the major industries, either directly or indirectly, dependent on agriculture. Weather uncertainties have substantial impact across all segments or sectors of the economy, most importantly FMCG, travel, tourism and transportation. In this direction, financial derivatives such as weather derivative instruments can be a great aid to farmers, retailers and companies.

A weather derivative, also called as climate derivatives was launched through the exchange mechanism in 1999 on the Chicago Mercantile Exchange (CME). It is a financial instrument used by farmers, traders and the companies to hedge against the risk of weather uncertainties, whose value is derived from fluctuations in the weather conditions such as temperature, irregular rainfall, and wind speed and so on, leads to different kinds of derivative instruments. These instruments can be traded in over the counter exchanges. Farmers and companies can take benefit of climate derivatives to hedge against low yield or financial loss caused by less or excess rainfall.

The FMCG, Energy and Big construction companies are the major consumers of these trades and contracts, with deadlines and huge penalty clauses. Also retailers, who are into big outdoor events turn to these derivatives.

Many get confused and compare this with the crop insurance, but it is different. Where the crop insurance is for low-probability events like hurricanes and cyclones, these weather derivatives covers high-probability events such as heavy rainfall, dry monsoon or a less cool winter. Worldwide, fluctuations in temperature and rainfall are the major weather risks that are hedged against weather derivatives. Even risks from other weather spectacles such as unpredictable rainfall could also be protected. In India, as protection is commonly used against impact caused due to the uncertainty and irregularity of rainfall, there is a traceable demand for rainfall derivatives.

From the Indian market standpoint, weather derivatives are beneficial if it is used for hedging against risk by companies whose performance and profitability is tied to monsoon such as fertiliser, FMCG companies, power-generating companies, seed companies, farm equipment manufacturers, etc., . Apart from farmers as well. Additionally, weather or climate derivatives market be able to help the crop insurance providers by bringing down the cost of insurance.